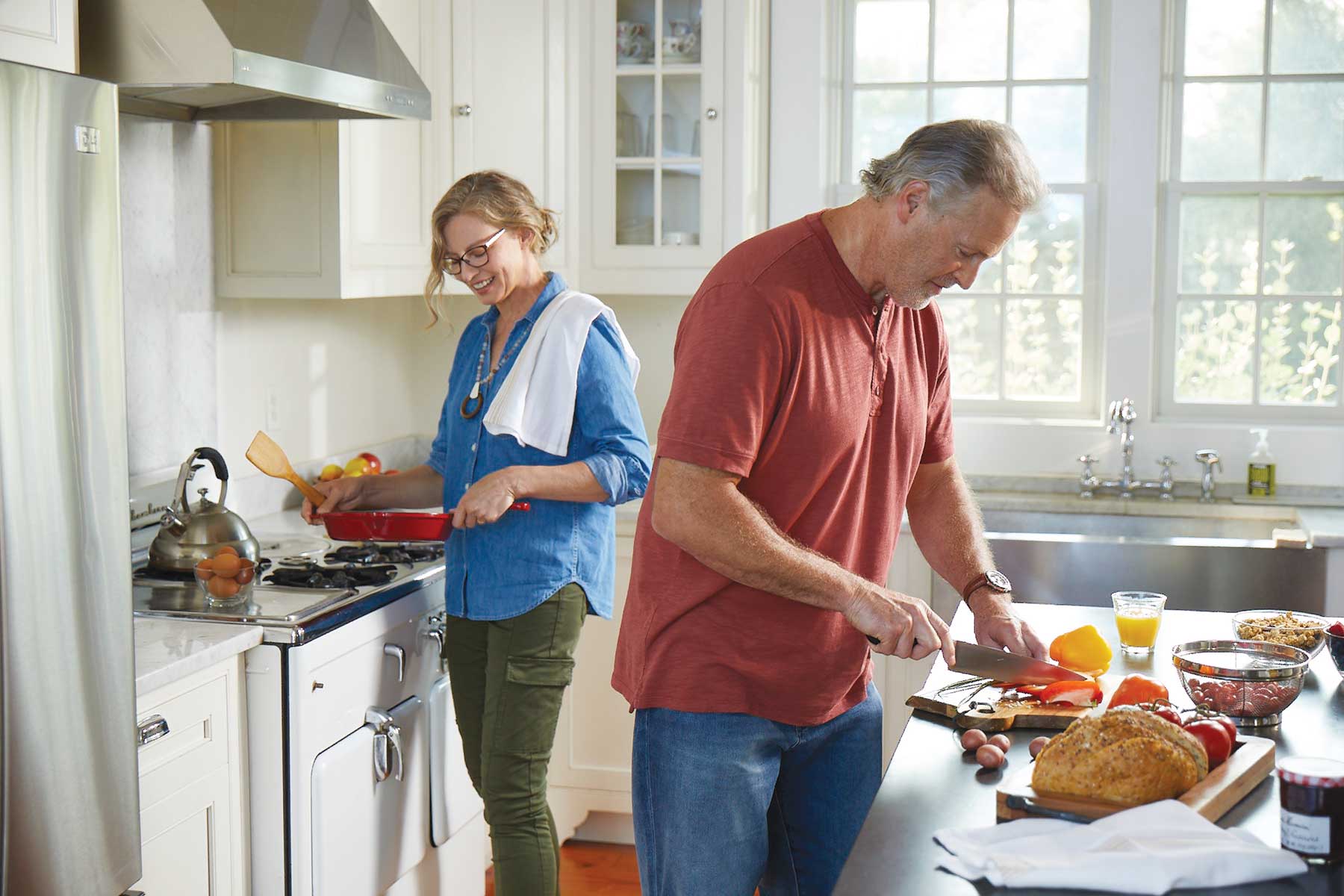 The Science of Food and Aging

Healthy eating is important at any age. But, during the aging process, diet can play a surprisingly major role in one’s vitality and longevity—perhaps even more so than genetics.

In partnership with the National Geographic Society, author Dan Buettner set out to find hot spots of longevity, known as “Blue Zones.” The hot spots had high concentrations of individuals over 100 years old, as well as clusters of older people who didn’t have health problems like obesity, diabetes, heart disease, or cancer.

Cultures identified as Blue Zones were spread throughout the world, with vastly different geographical and cultural attributes in each region. However, common denominators between food philosophy and consumption point to the intriguing idea that food and diet could be the prescription for a longer life. Here are some of their shared eating habits, and why these habits should provide food for thought for how to approach one’s diet during the aging process.

Your mother was right with her encouragement to “eat your vegetables.” Plant foods are loaded with nutrients and antioxidants, including polyphenols, carotenoids, folate, and vitamin C. In fact, after reviewing clinical trials and epidemiological studies* on aging, researchers found that people who ate plant-based foods were up to 50% less likely to develop chronic diseases that are more likely to present themselves during the aging process, including Type 2 diabetes, cancer, and heart disease.

This of course isn’t particularly new information—as cited by the review, there is robust existing research that has found eating more plant-based foods is associated with a lower risk of mortality and fewer instances of chronic diseases. In many of the world’s Blue Zones, meat consumption happens sparingly, as a side dish or used during special occasions. However, if you crave more than just plants on your plate, don’t despair. Fish can be a great source of omega-3 fatty acids that are crucial to both brain and heart health, and can provide a flavorful protein addition to your meals.

*The editorial was authored and funded by the Physicians Committee for Responsible Medicine, a non-profit research and advocacy organization that favors plant-based eating.

Research shows that eating ultra-processed foods can speed up the aging of your cells. Much of this is due to ultra-processed foods often containing a high amount of hydrogenated oils, which are full of trans fats and can promote the chronic inflammation that hastens the breakdown (or aging) of your cells. Not surprisingly, all Blue Zone diets place emphasis on real food consumption: raw, cooked, ground, or fermented—with recipes that carry an ingredient list of six items or less, a nod to the concept that food, not pills or commercial drinks, is the best source of nutrients.

Nuts are a terrific whole-food snack to replace more processed, unhealthy snack choices that can hasten the packing on of pounds which happens naturally during the aging process. An added bonus of these powerhouses is that nuts packed with omega-3 fatty acids may be able to improve focus and decrease the risk of Alzheimer’s disease.

Be creative with your calcium and fiber sources

Calcium helps maintain bone strength and keep bones healthy during older age, while fiber can help reduce the risk of Type 2 diabetes and heart disease—and both are key nutrients to include in your diet as you age.

But that doesn’t necessarily mean running out and purchasing special chews and drinks that are often marketed to older-age adults is the answer. For a calcium-rich boost, include dairy products such as milk, cheese, or yogurt in your meals. And if dairy digestion is an issue, give goat’s milk versions of these products a try; they’re often considered easier to digest. If dairy is not your thing, a surprising amount of calcium can be covered through plant-based food sources such as seeds, beans and lentils, and leafy greens. A bonus: these foods can do double duty in not only providing calcium, but a healthy dose of fiber as well, which can aid in digestion and satiation and help cut LDL (also known as “bad” cholesterol).

A simple but vital player in one’s health, water is needed for almost every bodily function including digestion, maintaining body temperature, and circulation. However, what many don’t realize is that the body loses water as we age—and along with that, unfortunately, we also lose our sense of thirst. To combat this loss, sip on water throughout the day, aiming for 8 glasses. Or, if you like to mix up your liquids, antioxidant-rich green tea may also enhance memory and mental alertness as you age.

Coffee and red wine in moderation

Moderation is key here; however, both coffee and red wine can play a complimentary role in a healthy diet for aging adults. Both beloved beverages contain antioxidants, which are known to boost the immune system. In addition, these beverages are known to promote blood flow and could potentially increase life span. In addition to being good for you, there are also feel-good benefits to both coffee and red wine. Some research shows that both could play a role in helping to reduce the risk of depression, and caffeine has been researched to work in tandem with a compound in coffee to boost brain health and potentially help prevent brain diseases such as Alzheimer’s.

As we age, our metabolism slows—a process that likely starts as early as the age of 40. While healthy eating and exercise habits adopted early can help to combat weight gain associated with this slowing down of our system, another option is to be more mindful of when, and how, you structure your caloric intake. Evidence is accumulating that eating in a 6-hour period and fasting for 18 hours (commonly known today as intermittent fasting) can trigger a metabolic switch from glucose-based to ketone-based energy, with increased stress resistance, increased longevity, and a decreased incidence of diseases, including cancer and obesity. Blue Zone populations will often eat their largest meal early on in the day (known as their “break fast” meal) and will moderate food consumption as they move toward the evening hours, when the body, and metabolism, naturally begins to slow down.

How you eat can also be as important as what you eat. “Healthy eating habits are important at every age, but they can make a big difference as we get older and our nutritional needs change,” says Karen Voci, president of the Harvard Pilgrim Health Care Foundation, whose Healthy Food Fund focuses on increasing access to fresh foods for all generations in the New England region’s communities. Voci encourages the physical and psychological benefits of multi-generational food sourcing and preparation. “Preparing delicious meals using fresh, local produce is fun and healthy at every stage of life, and can help us feel better and improve our health and wellbeing.” The populations known for being longest-lived also have a tendency to enjoy their meals with family and friends, and they often express gratitude before consuming their meals—a recipe for health, happiness, and hopefully–longevity.