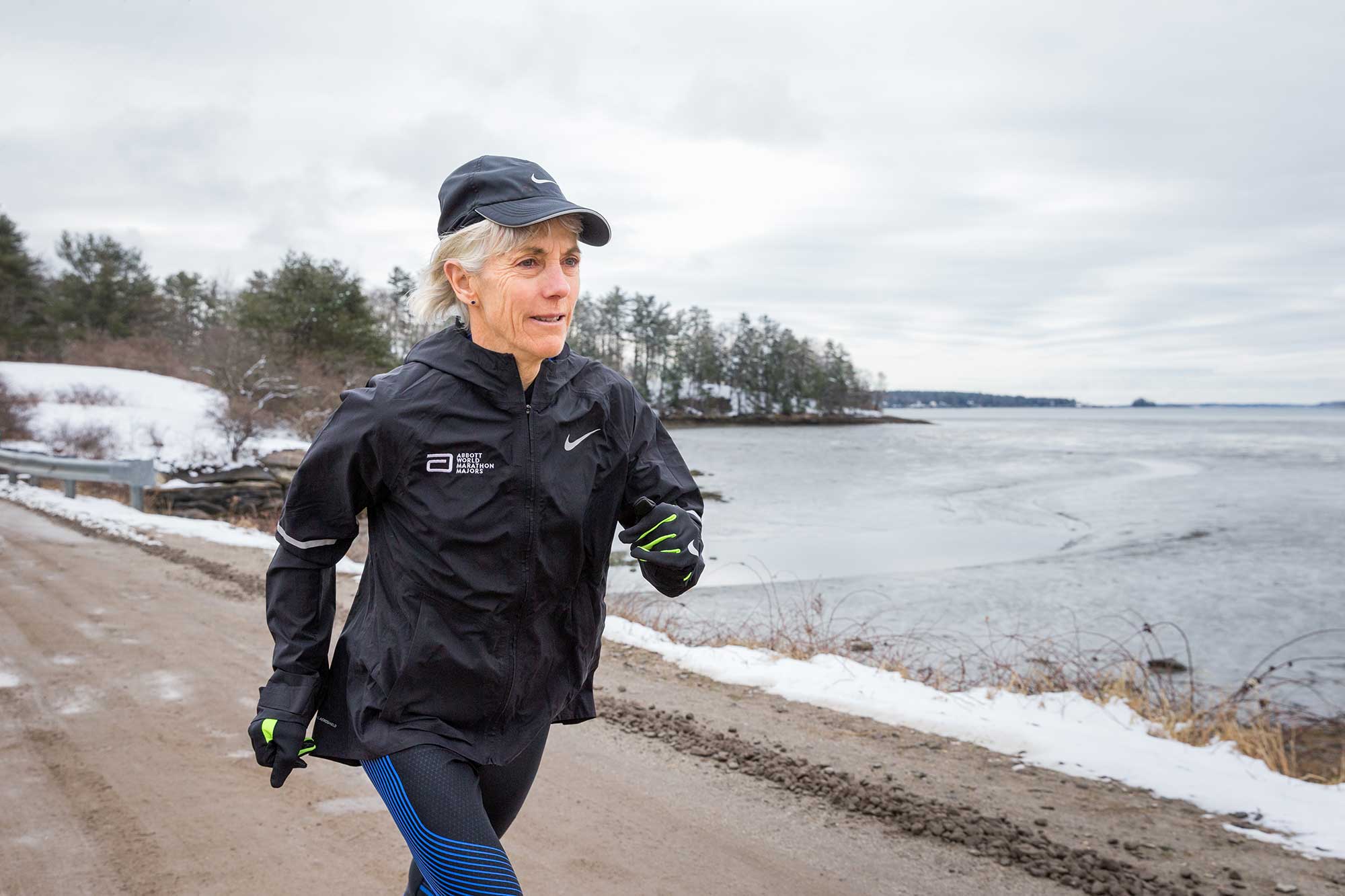 Running Resilient: A Look Into the Longtime Career of Joan Benoit Samuelson

“I don’t like it when somebody passes me. I mean, I guess I’m still a competitor … I was passed on a bicycle the other day and I didn’t even like that—and cycling isn’t even my sport, but I still take it seriously,” says Joan Benoit Samuelson.

At age 64, Samuelson continues to embody the competitive spirit of an athlete. Her list of accolades as an elite marathoner—including six marathon wins, one of which brought her a gold medal at the 1984 Olympics—is extensive, yet she wonders if her proudest running achievement may not have happened yet. “I would like to say it is yet to come because I’m so much of a storyteller. If I could run a fast marathon in my sixth decade, that would be really cool,” she says.

Having already run sub-3-hour marathons in five different decades (the only woman to do so), Samuelson’s intense drive to achieve the same in a sixth decade underlies her quiet demeanor. Her grit, determination and, of course, competitive spirit keep her going, though she attributes her successful career to what she refers to as the four Ps—passion, patience, perseverance, and persistence.

These attributes were developed during her upbringing and experiences growing up in Maine. The coastal town of Cape Elizabeth was home to Samuelson, along with an island off the coast of Maine, where the family would spend a few weeks each summer. In her autobiography, “Running Tide,” Samuelson says that her time there during childhood helped shape her. “The island, the mountains, the little school I attended, and, especially, my family—these were my nurturers. Within my early experiences were the lessons I needed to prepare me for life as an athlete,” she wrote.

The mountains she mentions were the site of her first brush with athletics. Skiing was a family activity, as her father had served in the Tenth Mountain Division during World War II. Prior to becoming a runner, Samuelson was a skier with dreams of making a career out of it—which included competing in the Olympics. It was after a ski injury in high school though that Samuelson switched gears to running, using it as a way to rehab an injured leg.

She remembers first being interested in running for its affordability and accessibility, but especially liked not needing to go to the mountains with expensive equipment to participate. “I could just run outside our front door and run to my heart’s content,” she says. Running brought Samuelson strength, happiness, and self-esteem, but only after it brought initial embarrassment. She used to pause on her run if cars passed by, hoping to hide her tomboy image by pretending instead to look at flowers. Eventually, she realized that she enjoyed running far too much to care what others thought.

At the time, competing as a female runner in what was considered a men’s sport had its challenges, but Samuelson was never one to run from a challenge (both literally and figuratively). She broke boundaries—and records—throughout her career while remaining focused on herself as an individual runner, only paying attention to other runners to help with her own skills. As a senior in high school that meant practicing with the boys’ track team for more competition.“Each runner dictates their own course of action among a larger population all seeking the same goal. It is such an individual, but collective event,” she says. In her book, she even stated that the 1979 Boston Marathon was a “private test, Joan running for Joan’s sake.” She won the marathon that year, which was to be followed by five additional marathon wins in the ‘80s.

Even today, Joan compares herself to the fastest runners at events—both women and men. And not only that, but she looks at the best runners overall, regardless of age, even those just graduating college. Running in her sixties is much like it was in her teens, still a daily part of life. Her recoveries may take longer as she’s gotten older, but age (and wisdom) has evolved the way Samuelson trains.

Health and wellness are the heart of her training philosophy. Cross-training with other sports like cross-country skiing, cycling, and swimming is part of her physical routine, but mental wellness is just as important. Samuelson appreciates finding balance in life through meditation and other activities like gardening and spending time with her family. Despite all her success, Samuelson admits she is still trying to master one critical mental health piece: relaxing. “I don’t relax well, and I think that’s something I need to learn how to do,” she admits.

Samuelson finds time with her family and community are often just what the doctor ordered. She has run marathons with both her children—special memories that she cherishes. Samuelson has also found ways to remain active in the New England community, including founding the TD Beach to Beacon 10K Road Race in 1988 (a race in her hometown that attracts elite runners each year).

It’s likely her physical and mental training philosophy will continue to evolve, as opportunities and challenges that come with age are ones to embrace. “Some years will be better than others, and others will be more challenging, but unless we embrace where we are at that moment in time, then I think we’re just cheating ourselves,” she says. For her part, she’s doing her best to slow down—just a little.