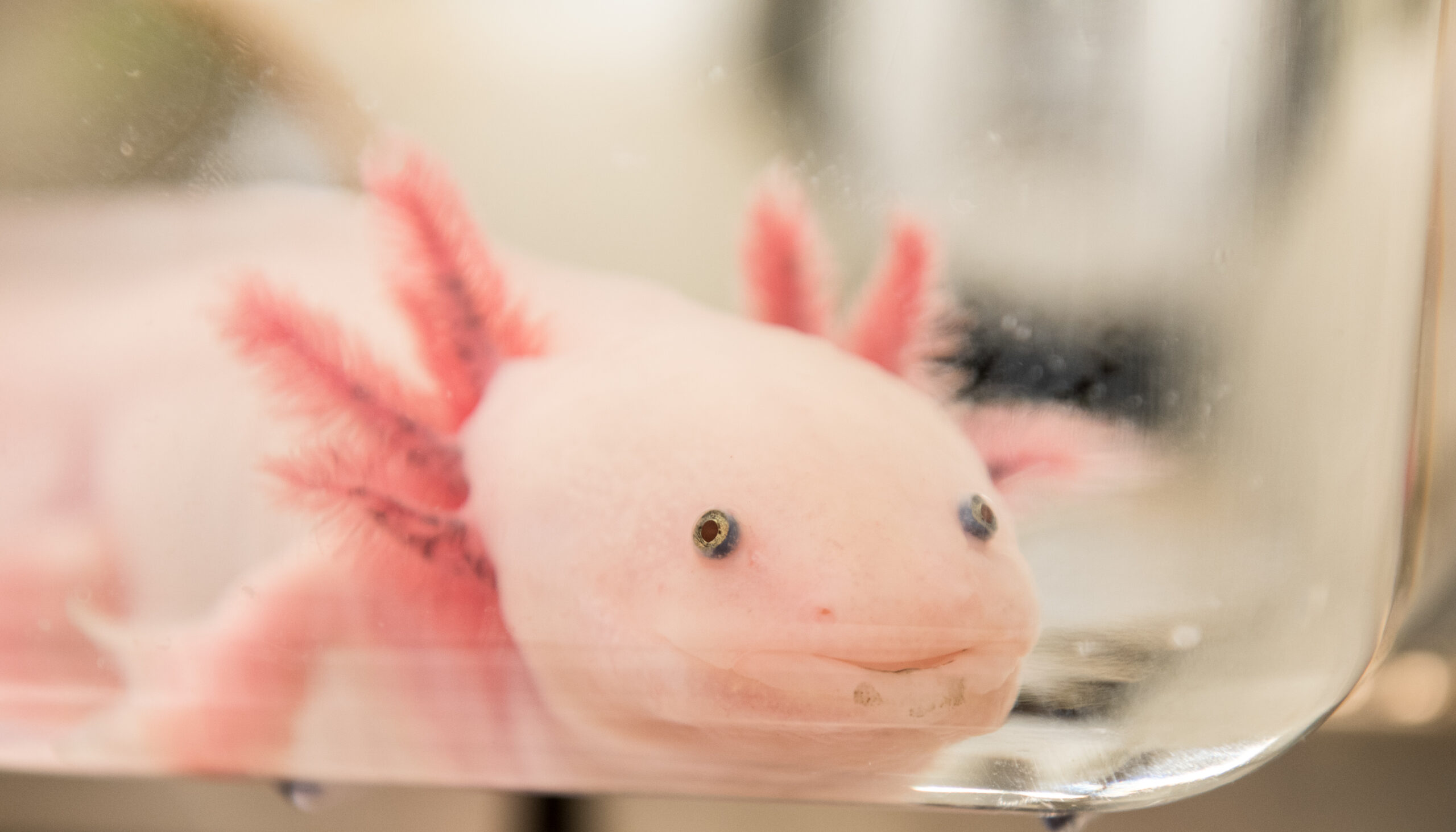 As MDI Biological Laboratory (MDIBL) works to answer critical questions about regeneration, this tiny creature, known as axolotl, or Mexican salamander, may hold the key. Native to Mexico City, these ancient creatures are masters of regeneration. Unlike humans, the axolotl can regrow almost any body part, including the brain, heart, jaws, limbs, lungs, ovaries, spinal cord, skin, and tail. Limb loss affects nearly 2 million people in the United States alone. And while many limbs are lost as the result of traumatic injury, the majority are lost to diabetes and other diseases that affect the health of blood vessels.

When humans suffer traumatic injury, we form a fibrotic scar because we are unable to regenerate the deeper layers of our skin and connective tissue. Once a scar has developed, it’s “game over” in terms of regeneration. Thus, the ability to trigger regeneration in humans depends on getting around the scarring hurdle. Axolotls, on the other hand, don’t form a scar. Instead, cells at the injury site are triggered to regrow new tissue.

Scientists at the MDI Biological Laboratory are working to understand the intricate interactions between various cell types to understand how the choice between scarring or regrowth is determined. If regeneration in humans sounds like science fiction, it shouldn’t. Humans have a limited ability to regenerate – for instance, newborns can regenerate heart tissue, and children can regenerate fingertips. It’s likely that the circuitry is already there, but has been turned off to protect us against the threat of uncontrolled cell growth – or cancer. But what if we could temporarily reactivate this dormant circuity in adult humans long enough to repair an injury?

James Godwin, Ph.D. explores the molecular signals from nerve and immune cells in the axolotl that underpin their resistance to scarring and active regeneration in hopes of helping human patients repair tissue after surgery, disease, or traumatic injury.

Prayag Murawala, Ph.D.  tries to answer how tissue types such as the epidermis, bones, muscles, fibroblasts, nerves, vasculature, and immune cells in the axolotl coordinate after an amputation to perfectly restore the lost portion.

Although regrowing a body part as complex as a human limb may be years away, significant opportunities exist for therapies to improve clinical outcomes in diseases in which scarring plays a substantial role in the pathology, including heart, kidney, liver, and lung disease. As MDIBL continues to partner with other scientists in Maine and around the world to solve this challenge, our natural ability to heal and repair damage caused by disease and injury gets a little closer every day.